Please allow us to introduce the Stone Wolfpack! These are the artists that have really stood out to us and have earned themselves a full endorsement and induction into the Stone Wolf family. 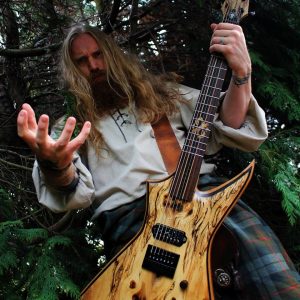 About the artist: Laird Logan Gunn is the rhythm guitar clansman and front man for Hærken, purveyors of ye olde death metal with distinct mediæval themes and an even more distinct image that centres around the Ash tree (a popular symbol in mediæval literature).
About the guitar: The Æsc 7 is a one-of-a-kind heavy metal guitar based on the explorer shape. The build features a British Ash body by very specific request, Wenge middle section with & British Spalted Ash top. The neck is Maple and Sapele with Spalted Ash faceplate. The observant among you may also notice the aesc symbol from the bands logo on the neck, and a truss rod cover to match the design of Justins impressive tattoos. The hardware is a passive Bare Knuckle pickup with an Evertune bridge.
Testimony:

“For so long I have yearned to play a guitar that sounds how it ought, looks how I crave and behaves how I expect. This is the beautiful result of six months of his commitment to, and passion for, the creation of something special from several planks of wood. The craftsmanship and love for an art are clear here in equal measure.
Simply breath-taking.
Not only is his talent unquestionable, at no point during the process was he unable or unwilling to accommodate any of my requirements. Even my unusual whims and seemingly impossible requests didn’t cause him to reckon me as an awkward customer. Indeed, notwithstanding the short time we’ve been acquainted, I feel like we’ve known each other for several years and I already consider him one of my oldest and best friends.” 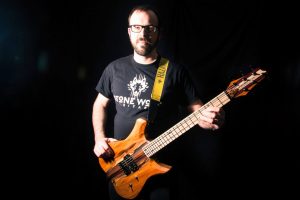 About the artist: Chris is one the guitarists from the Prog-metal band, Fractions. We first ran into Chris when we were a judge for the 2017 Leicester “Metal 2 The Masses” competition. This is a huge, nationwide battle of the bands, in which the winner in each region will play the Bloodstock Festival. We were also giving away our Rift model to our personal favourite guitarist from the competition. Chris blew us away with his attitude and playing ability. We well and truly deserved the guitar and we’re so happy to see him playing it now!

About the Guitar: The Rift started life as a stock build. It was the first guitar we made that included resin in its construction. You can read the whole story here. 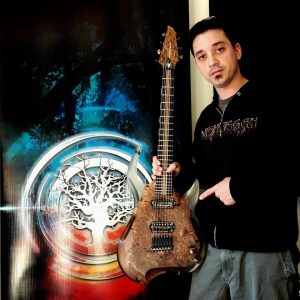 About the artist: Shaun Riptown is one of the very talented guitarists from the technical metal band, Autonomist. Shaun fell in love with our first Catalyst 7 build and immediately snapped it up, along with an endorsement from us. Autonomist are a Californian based band that produce complex and multi-layered music. We absolutely love their sound and style and are very proud to have them playing our guitars!
About the guitar: Shaun is the proud owner of our first ever Catalyst model. A precision 7-string guitar featuring Black Poisonwood set into clear resin, with Schaller hardware & Bare Knuckle pickups. See the full spec on our Models page.
Testimony:

“When I first saw the builds the “Stone Wolf Guitars” team were making, in the U.K, my jaw dropped to the floor. I knew I had to have one in my arsenal. I got a hold of Mike and Martin to get the details Immediately. The day the Catalyst 7 arrived I was in complete awe. It had everything in a guitar I could ask for from a high class flight case to all the best hardware and pickups you can get. Its an incredible feeling to own a guitar this unique, that you just can’t go buy in any other store. The clarity of the tones I’m now getting are unreal. I can switch from a beautiful “single coil clean” to a nice tight painkiller crunch. Mike and Martin are truly masters of their craft. They made me feel incredibly welcomed into the family and team. I’m already saving for my next model!” 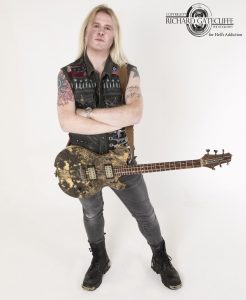 About the artist: Dan Weir is an incredibly accomplished guitarist, having played in multiple bands over the last few decades. His current band is Hell’s Addiction:

“Hells Addiction are a balls out, no nonsense hard rock band, tearing up the biggest stages from the Download festival to Hair Metal heaven. Described as the bastard child of a three way between Skid Row, guns n roses and ac/dc, Dan Weir’s guitar playing with its George Lynch, John Sykes and John Norum influences add flash and fire to the sound.”

About the guitar: The Buckeye Nova was the first iteration of our Nova shape. It was released to great feedback and Dan completely fell in love with it. With a pair of Bare Knuckle Pickups® Aftermaths, it give Dan all the punch and power he needs. It gives us great pride to see Dan on stage, shredding the life out of it!
Testimony:

“To stand behind a Stone Wolf guitar is pure perfection, from the minute I played my Nova model it was part of me, the wand chooses the wizard.” 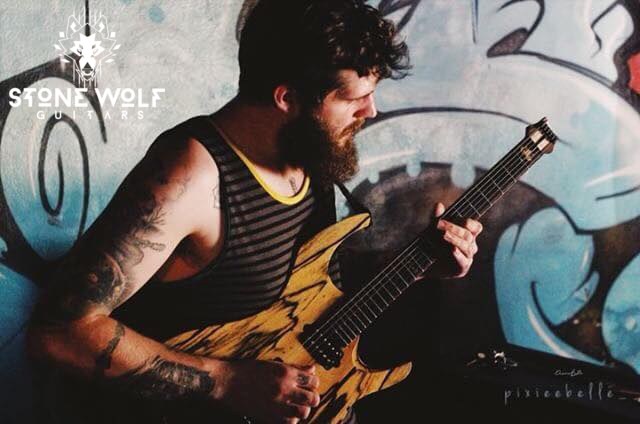 About the artist: James is a very talented guitarist hailing from Pennsylvania. He’s part of the stellar metal band, Burial in the Sky. He has a fantastic playing style mixing styles and techniques from all genres. Burial in the Sky were formed in 2013 and have had great success with their music. In 2016, their album, “Persistence Of Thought” was voted as one of Metal Injection’s albums of the year. In 2018 they released their 2nd album, “Creatio et Hominus” and it’s already gaining a great amount of praise! We highly recommend you check out their music on Bandcamp, Amazonmusic or their direct page!

About the guitar: James approached us, asking for us to build him a 6 string headless build with a floating trem. The guitar’s shape is his own design, taking rough inspiration from our Catalyst shape. We can’t wait to hear what amazing music he produces with this guitar! He named the guitar the “C.Masta 6”.

“Working with Stone Wolf Guitars had been incredible. They were hardworking, committed, and sincere through the entire process. I couldn’t be happier to rep them and be a small part of their team. The C.Masta6 has been an inspiring instrument since I have had it both on and off the road. I cannot wait to start writing with such an incredible extension of myself”. 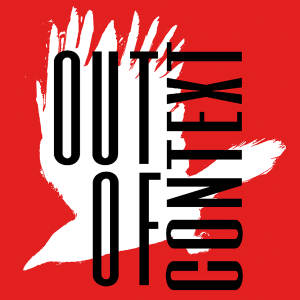 About the artist: Stephen is the rhythm guitarist in “Out of Context”. They are a 5 piece hard rock band based in Croydon, UK. Combining heavy metal riffs with funky baselines and melodic vocals to create a unique and engaging sound.
About the guitar: Stephen was a fan of our Inferno V2 design however wanted a more metal orientated version. We worked with him to create his own custom design and built the “Lycan” to his personal specification brief. The Lycan was designed as metal focused guitar from the ground up, that has one job and does it very well.
Links:
www.facebook.com/outofcontextmusic
https://www.youtube.com/channel/UCIg9HuvOjMi6P1-zssztDsA 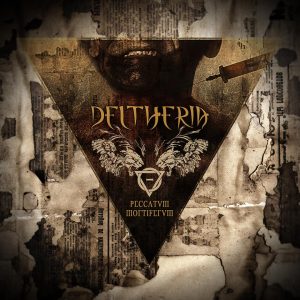 About the artist: Wieland is one of the guitarists in the Melodic Death-Metal band, Deltheria. He provides crushing riffs and complex melodies to the band’s dark and sweeping sounds.
About the guitar: The guitar we built for him, named Thunor, was all to his personal specifications. Including it’s exaggerated superstrat design and the Deltheria logo in between the pickups.
Links:
www.facebook.com/Deltheria